All the sights and smells of Autumn is in the air.  It seems that there are pumpkins on display everywhere you go.  This is great baking weather, not too hot to fire up the oven.  So let’s take two seasonal ingredients: pumpkin and cinnamon and layer them into a spicy quick bread.  Your house will be filled with this lovely aroma as they bake.

Mix the first four ingredients until well combined, scrape down sides of bowl.  Add in the last five ingredients and mix until just combined. (We don’t want to overbeat the batter because it has baking powder and soda in it) 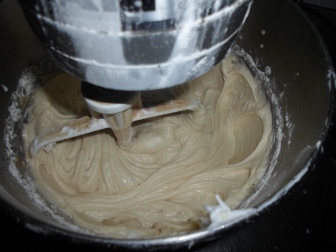 Divide the batter evenly into two bowls.   Into one half of the batter, using a spatula, mix in 1  1/4 Cup Pumpkin and 1 1/2 tsp Pumpkin pie spice.  With the other half of the batter mix in 1/3 Cup Dark Brown Sugar and 2 tsp Cinnamon. (use your fingers to break up the brown sugar so there will not be any lumps in your batter.)  Grease 2 loaf pans, and layer one fourth of the pumpkin batter into the bottom of each pan.  Spread with an offset spatula and tap pans down on the table to level the batter.  Now divide the cinnamon batter into both pans evenly, half of the batter into each.

Bake in a 350 degree oven for 40 minutes.  While these are baking, let’s make our streusel.

Mix with the paddle attachment until crumbly, a.k.a streuselly! 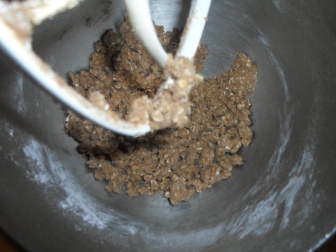 After the 40 minute baking time, carefully take out the loaves and divide the streusel over each.  Put back into the oven for another 15 minutes. 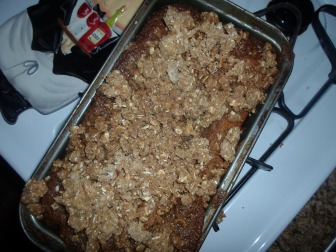 Let them cool in the pans for about a half an hour.  Then take a butter knife and run it around the sides of the pans and tilt the loaves out.  Set them on a cooling rack. ( I finally broke down and bought two cooling racks! ) Let them cool down to room temperature before slicing.

This truly tastes like Autumn to me.  The spicy pumpkin layer intertwined with the brown sugar cinnamon batter, let’s not forget the added crunch from the brown sugar & oat streusel.  Take the time to make these on a cool Autumn eve, while the kids are carving their pumpkins!