I was recently given a rice steamer.  I love it, the rice is just like in a Chinese restaurant, it is never sticky and you can use the cheap plain bagged rice.  My boyfriend loves rice pudding, so I steamed some rice with cinnamon and this recipe begins!

Put all ingredients into the rice steamer and cook as directed.  If you don’t have a steamer, just boil off 2 Cups of rice, after you drain it, stir in the cinnamon.  Let cool.  I refrigerated it overnight.

In a medium saucepan bring the milk and first 1/2 cup of sugar to a boil.  In a bowl whisk yolks, whole eggs, cornstarch and sugar.  Pour hot milk mixture into yolk mixture and whisk. 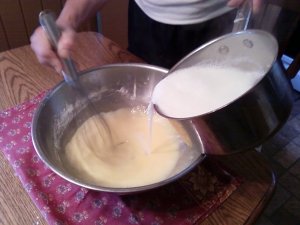 Put back on the burner on medium high heat and whisk until it comes to a boil.

Take off heat and whisk in butter, vanilla and banana. You just made Pastry Cream, the main staple that baker’s always use for fillings, puddings and pies.  Wasn’t that simple!

Put all ingredients into a small saucepan.  Bring to a boil.  Take off heat, the liquids should be absorbed into the raisins.  If you have any excess liquid just drain a little of it out.

Let’s assemble: Take the cinnamon rice, pastry cream and vanilla & cinnamon infused raisins and stir together.  Put this mixture into a buttered glass casserole dish, or if you have individual casserole dishes use them.  I recently treated myself to these small casserole dishes, I have used them many times for desserts as well as for mac n’ cheese.

Heat up your broiler, we are going to Brûlée the top of our pudding.

Sprinkle the top of the pudding with 3 to 4 Tablespoons of Sugar, enough to cover it.  Place under broiler.  Watch it carefully, you don’t want it to burn, you do want it to be bubbly and brown.  This takes about 6 to 7 minutes.

I think this is much quicker than traditional rice pudding.  I love the banana thrown into the mix, it adds texture and flavor.  Let the pudding cool a bit, this will allow the sugar to “crisp” up so you get the crunch of the Bruleed (I don’t think this is a word!) topping.  The texture is extra creamy and the taste of the vanilla and cinnamon shine through.  Anyone that likes rice pudding will go bananas over this one.  Give it a try!