I had a craving for a cinnamon bun, so I pulled out a recipe that I have been wanting to try for a while now. The recipe is from bon appetite, March 2009 issue, it’s called Yukon Gold Cinnamon Rolls. I know it may sound odd to add one pound of mashed yukon gold potatoes to a sweet roll recipe, but think of the texture of potato bread. Potato bread is soft and almost moist tasting, well this is how this sweet roll dough tastes. I must say I have been looking for a yummy cinnamon roll recipe for a long time, and this one is the best I have ever tasted. I was impressed with the texture and taste of this dough that I wanted to change the filling and the glaze.  I love a P.B. & Jelly and I think a lot of people do, so what about a sweet roll, same dough, but change the filling to peanut butter and top it with a black raspberry glaze! Hmmm… Let me tell you the recipe for the filling and the glaze, you be the judge of this spin on a P.B.& Jelly sweet roll.

Make the Yukon Gold Cinnamon Roll recipe, don’t change a thing with this, but use my recipes for the filling and the glaze. 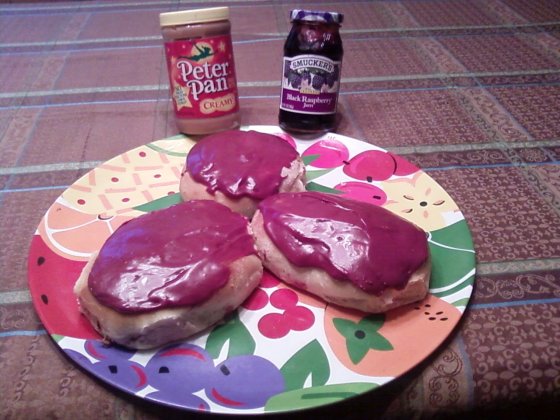 Mix until crumbly, substitute this for the cinnamon filling. Proceed with directions in recipe.

Let buns cool until lukewarm, then ice with Black Raspberry Glaze, you can use any flavor of jam that you like, I am a fanatic for black raspberry.

Mix together on low speed until combined, scrape sides of bowl, then mix on high speed for 3 minutes. It will be a thick glaze, more like a butter cream.

Eat them while warm and don’t forget a tall glass of milk.  Now close your eyes and you should feel like a kid again. P.B.& Jelly sweet roll with a glass of cold milk, it doesn’t get any better than this!